Stakeholder Management Templates & ebook
Over 2000 business professionals from a wide range of industries have used our Stakeholder Mapping Templates. Templates include:

Bitcoin and other Cryptocurrencies are growing rapidly. In April 2017 Cryptocurrencies exceeded the annual GDP of 60% of the countries in the World. Bitcoin is a digital currency created and stored electronically. Bitcoin is not controlled by any nation or bank and are not printed like conventional currencies. Bitcoins are created by a process called mining - computers or mining equipment create coins by solving complex mathematical problems.


Download this list of Bitcoin Stakeholders
Bitcoin and Cryptocurrencies will be and are relevant to project and stakeholder management. From projects to create mining hardware and innovative uses of Blockchain technologly to Bitcoin being used as a method to fund project delivery. In April 2017 projectmanagement.com held a webinar on Cryptocurrencies stating that:

"projects that…. Involve Cryptocurrencies will grow dramatically over the next several years. This webinar will…. prepare the PMs for the challenge of managing these projects"

This is a list of the typical stakeholders that are involved in Bitcoin, feel free to use it as a checklist to start your stakeholder analysis. This list is a work in progress and I expect the list will develop as the use of digital currencies evolves. 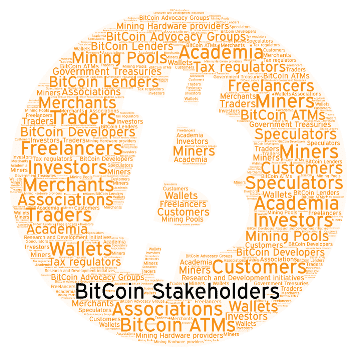 Universities that have set up centers to research and support the growth of Bitcoin, for example MIT's Digital Currency Initiative (DCI), which supports bitcoin core developers. See also Research and Development Initiatives.

Non-profit groups who provide research and education on Cryptocurrencies. For example Bitcoin Foundation and Coin Center.

Providers of BTMs which are modelled after the ATMs (or cash machines).

The developers of the core code.

A growing group of people who prefer to be paid in Bitcoin. They may be in full-time employment or take gigs or contracts via Bitcoin freelancer job sites.

Owners of websites dedicated to Cryptocurrencies, along with social media influencers and coin fan sites.

People and organizations that invest in Bitcoin with the expectation of gaining a profit.

Users of peer to peer Bitcoin lending sites who lend Bitcoins for an agreed interest rate. For example see Bitbond.

Businesses that accept or use Bitcoin.

Individuals, groups and companies who provide computer power to mine and record the transactions within the Blockchain. They receive mining rewards (Bitcoins) in exchange for the resources they provide.

Miners work together in a pool sharing block rewards among the miners. Examples are AntPool and BitFury Pool

Short term investors in Bitcoin who take larger risks in the hope of quick gains.

E.g. IRS – country tax collection departments are interested in Bitcoin in relation to tax obligations for example the IRS has said that income from mining could constitute self-employment income and therefore be subject to tax.

Those who buy and sell Bitcoin as agents, hedgers or speculators.

E.g. U.S. Treasury – Bitcoin is not controlled or backed by any institution or country as such treasuries are making decisions on the status of stakeholders involved in Bitcoin. For example the status of miner as Money Transmitters.

Providers of Bitcoin wallets for example Coinbase, Blockchain.info or StrongCoin.

Coinbase - a Bitcoin wallet "the world's most popular way to buy and sell bitcoin, ethereum, and litecoin."