Over 2000 business professionals from a wide range of industries have used our Stakeholder mapping templates. More information
Templates included:

Secondary Stakeholders have an indirect relationship with a company. They tend to not be employees or directors and don't have any direct engagement with a company, but can still be influential. For example a group representing a companies' shareholders could be thought of as a secondary stakeholder. stakeholdermap.com 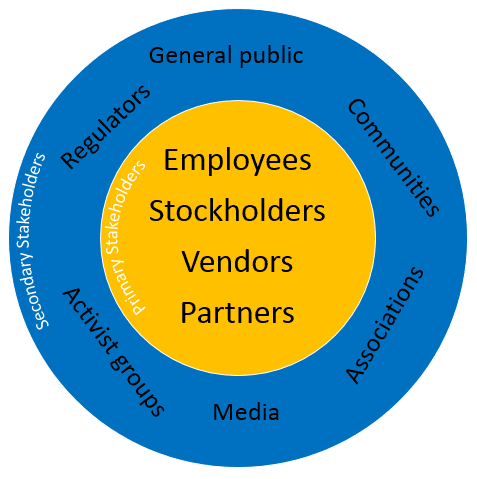 It is common to attempt to categorise stakeholders based on their characteristics or perceived proximity to an organization. For example, stakeholders can often be split into internal (employees, managers) and external (suppliers, customers).

Who are Secondary Stakeholders?

Secondary stakeholders are at one remove from the firm. Their influence can be significant, but tends not to involve direct engagement. Staff have a direct engagement with the firm, but unions or organisations representing staff in that firm's industry don't - the relationship in that case is more representational (Partridge, Jackson, Wheeler and Zohar, 2005). For example, a charity for retail workers might represent retail staff, but to a retail company they are a secondary stakeholder whereas the staff are primary stakeholders.

Secondary stakeholder may be surrogate representatives for stakeholder groups that don't have a voice for example the natural environment or future generations (Partridge, Jackson, Wheeler and Zohar, 2005).

References and further reading on stakeholders


Support stakeholdermap.com
If you liked this page, feel free to share it!